The Chettiyar wedding photography for a Kovai bride

She was a bride from the land of art, textile and temples. She didn’t know when she met him that she would love him and they would become inseparable. He didn’t know she would be the woman with whom he would spend this lifetime with growing old together and drinking coffee watching the sunrise.

It wasn’t love at first sight, it wasn’t the typical I met him or I met her and everything fell into place. This is a tale of two people who took life in their own hands, who took it one step at a time, they were realistic and well they struck a chord in each other’s hearts. They don’t have the same likes, they are different people.. But they finally fell in love.. They fell in love with their differences and flaws.They wanted to do things the Karaikudi way, go all out the Chettiyar way. The idea of doing this a little differently came from the bride’s relative, when she suggested it to the bride she was all for it. We all know Karaikudi is known for its rich heritage and over the top cuisine and we love it for what it is. Sometimes to veer away from the norm that is expected of us makes a life changing impact. Right from the location for the engagement to the dress the hunt began. Friends and family played an integral role in helping the couple. She had two options a purple saree and a pink one which went amazingly well just as how she had imagined it in her head with her groom’s attire. A lot of attention to details was given and the outcome was nothing short of breath taking beauty.

Are you wondering how to propose to your bridesmaids? Asking your bridesmaids or maid of honour that big question with bridesmaid gifts is almost as exciting as getting engaged, but let’s be honest – coming up with fun bridesmaid proposal ideas is only half the fun! If you’re getting your… Planning a wedding can be a tedious process that too a Lockdown Marriage because traditional weddings are all about those billion-minute details that could go wrong. While COVID-19 has taken the world by storm, the couples can be creative during the Lockdown wedding preparations and be mindful of their… 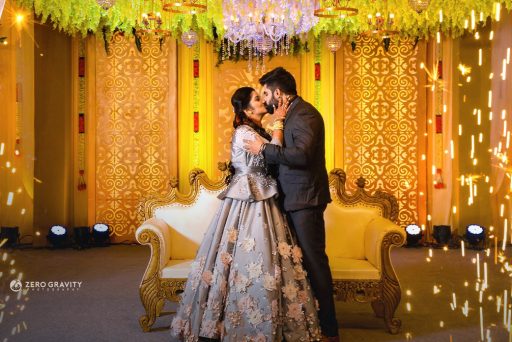 “Distance makes the heart grow fonder and fonder” “She wasn’t exactly sure when it happened. Or even when it started. All she knew for sure was that right here and now, she was falling hard and she could only pray that he was feeling the same way.” — Nicholas…

Allow us to show you how